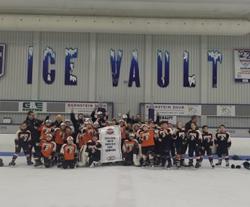 Brewer Youth Hockey was well represented in the state tournament, as both 10U Black and 10U Orange had incredible runs through the tournament.

Brewer Black opened the tourney with a 7-0 blanking of LA Nordiques White, while Brewer Orange finished off day one action with a come from behind 5-4 triumph over Biddeford Red.

Day two saw a close matchup open the day with Black prevailing 5-3 over Maine Gladiators, followed by Brewer Orange defeating previously unbeaten Biddeford Blue 4-3.  Brewer Black finished out their round robin games with a 2-1 loss to Presque Isle, placing them on the top of their bracket. Brewer Orange beat LA Nordiques Blue 8-2 to clinch first place in their bracket.

In the crossovers on Sunday, 10U Black beat BYHA Blue 3-2 and 10U Orange beat Maine Gladiators White 4-2 setting up an all Brewer final.

Brewer Orange prevailed 4-2 in the final against Brewer Black, allowing Brewer Youth Hockey to finish 1,2 in Maine at the 10U Tier 4 level.

Great Job all weekend, and Fear the Witch!